When you hear the brand name Samsung, what comes to mind is high-quality smartphones. Recently, this company announced an addition to its Galaxy product line, the Samsung Galaxy F12. In this post, we will discuss the price, specs, and features of this device. 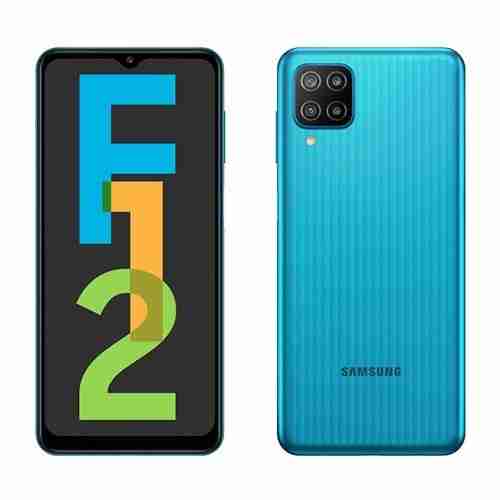 At the time of writing this post, the Samsung Galaxy F12 can is yet to hit Zambian retail stores. We have taken the liberty to check figures online to come up with a price estimate for the smartphone. The Samsung Galaxy F12 should cost between KW57,000 and KW65,000 when it finally enters the Zambian market.

In this section, we will take a look at the different features of the Samsung Galaxy F12. Let’s find out if this device lives up to the hype.

When you look at the Samsung Galaxy F12, its design reminds you of a previous device from the same company. The company recently started repeating its designs for low-budget devices. This device resembles the Galaxy A12 and M12. Of course, this isn’t a bad thing, however, most people would have expected more.

Let’s begin our discussion from the rear cover of the smartphone. It features a linear-patterned style all through the plastic cover. The rear cover also features a square-shaped camera module carrying four cameras. Samsung places the LED flash beneath the camera module. This feature assures the user of clear noiseless photos in dark environments.

Samsung places a 6.5-inch screen in front of this device. It also adds a drop notch close to the top of the screen. The front camera of the device is embedded within the drop notch. This device has a 720 x 1600-pixel resolution, a refresh rate of 90Hz, and a 270-PPI density.

What does Samsung add to the side build of the Samsung Galaxy F12 to make it unique? Nothing. The side build is similar to most of the smartphones in the same category. All you have here are the power and volume buttons.

Samsung is recognized for its high-quality cameras. Considering that this device falls into the low-budget category, Samsung equips it with a great primary camera. Most people will consider the camera of a device before they purchase it and Samsung understands this.

These days, people are more concerned about their selfie cameras. This is because selfies are the new trend, especially on social media. The selfie camera of this device presents you with 8 megapixels and an f/2.2 aperture. This camera can also record videos of 1080p at 30fps, just like the rear camera.

The performance of a smartphone is far more important than every other thing. Samsung put in a lot of effort to ensure that this device performs optimally despite being in the low-budget category.

The first thing that you will notice is the chipset. Samsung equips this device with the Exynos 850 chipset along with an 8nm process. This is added to an octa-core processor. All of the graphics and gaming processes on this device are controlled by the Mali-G52 GPU.

Now, let’s look at the software of the Samsung Galaxy F12. This device runs on the most recent Android 11 operating system. It is based on the One UI 3.1 user interface. With both the software and hardware of this device, you can rest assured of the high performance of the device.

The battery life of a smartphone is a very important factor to consider before purchasing a smartphone. Samsung has equipped the Samsung Galaxy F12 with a 6000mAh battery. This promises you several hours of talk, gaming, and standby time. You can rest assured that you don’t have to plug in this device every few hours which can be quite inconvenient.

One of the major improvements on this device is the Bluetooth feature. The Samsung Galaxy F12 comes with the low-energy Bluetooth 5.2. It also features a USB Type 2.0 and a 3.5mm headphone jack. Samsung caps the internet connectivity of the Galaxy F12 at 4G. What this means is that you wouldn’t enjoy 5G with this device.

Samsung Galaxy A50 Price in Zambia

Samsung Galaxy A30 Price in Zambia

Samsung Galaxy A40 Price in Zambia